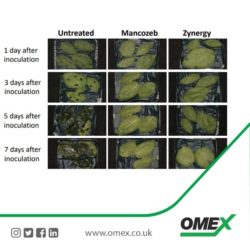 Results from two years of trials using a new nutrient formulation launched this month suggest that it may offer a bonus in the way of synergistic activity. It has been billed as a ‘unique complex of zinc and copper’ which could form part of an integrated crop management program.
For a long time, we’ve been talking about the benefits of nutrition for crop health, OMEX® technical development managed David Booty observes. ‘Ten years ago, nobody was taking a great deal of interest – it was muck and mystery, there was a full arsenal of crop protection products out there and more on the way – but it’s an idea now whose time has come because of changes in the industry.
‘Many pathologists would say that a lot of diseases and pathogens come in on the back of crop stress. We had anecdotal evidence that some combinations of nutrients held promise in this area so we decided to put some proper science behind it.
‘CELL POWER® Zynergy is probably the first of a new stable of products. It’s a nutrient formulation of copper and zinc with enhanced bio-availability – that’s a fancy way of saying that it is formulated for improved crop uptake. What we say is that it compliments, often in a synergistic way, the fungicidal and bactericidal activity of agrochemicals. Used in a program with crop protection it can enhance the results, but we are not claiming that it is a fungicide and have no intention of registering it as such.
‘This is a genuine fertilizer which does provide plant-available copper and zinc, both, of which play a part in crop health later on. We’re not a hundred percent certain about its mode of action but we believe that it is boosting the plan’s own defence mechanisms and it has shown particular promise against rust and Phytophthora diseases.’
Initial lab tests at Nottingham University with inoculated potato leaves showed promising results when CELL POWER® Zynergy was compared with contact fungicide mancozeb. Using a virulent strain of blight both treatments appeared to hold back infection. The next step was to put the product in replicated plots at the Eurofins trials in 2015. Compared with a full fungicide programme, CELL POWER® Zynergy mixed with half rate fluazinam (Shirlan) and a foliar nutrient gave encouraging results. ‘If anything, the canopy looked better than on the fungicide plots,’ Mr Booth recalls. ‘The foliar feed combination under intense disease pressure held up pretty well.’ Further trials at Eurofins last season included yield assessment. ‘As you might expect, if you prolong the life of the canopy you get a stronger yield,’ he adds.
While field experiments appear to suggest that CELL POWER® Zynergy performs well compared to standard sprays, Mr Booty is reluctant to overstate the significance of the findings. ‘I don’t think we want to say to potato growers that you can cut back on fungicide treatments,’ he cautions.
Nor does he claim systemic activity. ‘Movement of copy and zinc through the plant did not confer protection to parts left unsprayed. Similarly, we looked at curative action and while there was a little, it pretty soon ran out. We’re not talking about the kickback control you get with some fungicides. CELL POWER® Zynergy acts as a protectant similar to mancozeb but you need to treat the plant before the disease takes control. The only negative indication, as with any foliar nutrient, is that if it’s really hot and the crop is under stress you might get a big of phytotoxic spotting, but with good wetting chemistry and careful timing that shouldn’t happen.
‘It is an effective foliar fertilizer. We don’t want to make a plant protection claim but it does have obvious useful synergy in integrated pest management programs against a range of diseases.
‘That can be especially useful where you have harvest intervals or if there are gaps in the conventional program. You can plan a seven-day blight program but you might not be able to stick to it; something that helps confer a bit more protection could be useful in those circumstances.’

This website uses cookies to improve your experience while you navigate through the website. Out of these, the cookies that are categorized as necessary are stored on your browser as they are essential for the working of basic functionalities of the website. We also use third-party cookies that help us analyze and understand how you use this website. These cookies will be stored in your browser only with your consent. You also have the option to opt-out of these cookies. But opting out of some of these cookies may affect your browsing experience.
Necessary Always Enabled
Necessary cookies are absolutely essential for the website to function properly. This category only includes cookies that ensures basic functionalities and security features of the website. These cookies do not store any personal information.
Non-necessary
Any cookies that may not be particularly necessary for the website to function and is used specifically to collect user personal data via analytics, ads, other embedded contents are termed as non-necessary cookies. It is mandatory to procure user consent prior to running these cookies on your website.
SAVE & ACCEPT